Viper 640 internationals probably got the befitting weather condition as per the name of the competition. 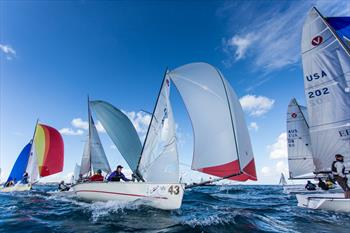 The day the event was held was a stormy though bright day and it helped bring out the best among the competitors. Held at Hamilton in Bermuda, there were several stalwart sailors who competed in this event. For instance, Zeke Horowitz, who sailed with Brendan Healey as well as Ian Coleman, was able to have a lead in the races up to six finishes. The races were held on November 18th at Great Sound in Bermuda.

The competition known as Aspen Viper 640 International Championship saw the trio have a yellow spinnaker which is a fixture that is familiar in the circles. The trip was sponsored into the event by EFG. There were other Viper 640 competitors of North America category as well. As Horowitz stated later, it was definitely great to be standing on top of the stands, but the sailing experience had been worthwhile as well. END_OF_DOCUMENT_TOKEN_TO_BE_REPLACED The GAC Pinder lead by Ian Williams is touted as the favorites to win the M32s and they lived up to the expectations of the crowd. This British racing team had their first performance on the Helsinki circuit in 2015 and has returned this year with much vigor. The series leader of the M32 race was the GAC Pinder team and their experienced crew members are happy with the performance that they had put up on the first day. They bet the other teams, six times out of the seven races and won the praises of everyone present at Hernesaaren Ranta. END_OF_DOCUMENT_TOKEN_TO_BE_REPLACED

A large group of sailors, about 24 and volunteers gathered in the second weekend of July for taking part in a match race that was inaugural for a program designed to help sailors with adaptive needs. The Clagett – Oakcliff match race was led by Dave Perry as coach along with Sonar teams that were eight in number.

These teams got right down to match racing and many tried it for the first time in their diverse careers. The match race was held at Waterfront Center in Oyster Bay and needless to say, Jen French being the silver medal winner, remained undefeated by the end of the event. END_OF_DOCUMENT_TOKEN_TO_BE_REPLACED